This bar is my living room – my actual residence is not large enough to have all of these great folks over – so they come to my living room at Giddy Ups. Sometimes when we have younger folks come in and they start to act up – I just say “hey, would you do that or act like that in your Mom’s living room, this is my living room and you cannot act like that here”, and a lot of folks do call me Mom. I have zero tolerance for rude and vulgar behavior and most everyone knows this.

You treat people decent, respectful and respect the bar and have some manners. One of our mottos at Giddy Ups – “NO WHINING” – we do charge a $5.00 fine for whining but also “We Welcome Good Friends & Good Times”.

All walks of life come into this bar, bikers, hillbillies, attorneys, insurance agents, real estate agents, Hispanic, black, white, and they ALL get along with each other – it is simply amazing to most folks that first come in. I was raised in the Sierra Nevada Mountains with loggers, cooked in a logging camp. Texans have a tendency to be or think they are bigger, badder and rougher – well I know for a fact this is not true. The rowdy bars in the mountains of North California were rough. 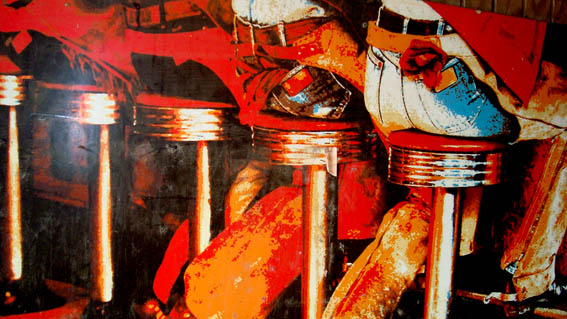 This bar has been here for 65 years, started out as Dotson’s – was a black bar, everything south of Slaughter Lane was “black town” and the Dotson’s owned a lot of the property where Giddy Ups is, and all 3 parcels of property 1 north of Giddy Ups and 2 south – where Mr. Gatti’s is and the lot immediately south is still owned by the Dotson’s. We were out in the boonies – across the road where the storage place is now was a beautiful cattle ranch and used to have calf roping and events there. I have had customers ride their horse to the bar and home again. A few times there where real, live horses inside the bar, just hanging out.

I have been working at this bar for 16-17 years now, and have owned it 13 years. It has been Giddy Ups since 1993. A local neighborhood bar – a place for people to meet, and socialize. It used to be a rough and tumble place – fights – guys and sometimes gals would get into it. I would get them to go out back to fight and not tear up the bar – they would go fists to cuffs and then come in clean up and buy each other a beer – life was simpler then – no knives, guns and deadly violence, just good old fashioned fist fights and still be friends. A longtime customer Art came in, I was working a double, and opening, I said “I’ll be right with you Art as soon as I clean up this blood over here” – Art still comes in.

We’ve lost some old timers over the years, Mr. Harvey, “Uncle” Gene New, Lester Shiller – he used to play pool with the broom stick – the handle end – and won every time. He would take the broom, turn around to the bristle side and sweep the table when he finished, the youngster that was playing him would just stand there in dis-belief and often be a bit pissed but still amazed. It was hilarious. We’ve also lost Mr. Hugh, John Hardin – kin to outlaw Wesley Hardin. We had a round table, and the old timers would sit and tell stories and share their lives – depending on the conversations, we would call the table “the school house table” or the “liars table.” Terrific memories and love.

We used to have “turkey shoots”, hayrides, bon fire cookouts. “Turkey shoots” was guys and gals, including me, shooting shotguns at targets or clay pigeons – we had a blast with this on Sunday afternoons. When the subdivisions came in on the back of the property it became too dangerous and we ended these. We also had dove hunting on the back of the property during dove season.

I believe in giving back to the community and the community comes together as family, even with disagreements, upsets, various point of views, we are still family, and we are not clicky, we introduce new folks to each other. There are many people in this bar that have made friends for life for many years now. Our new people, we start off “hey, we got a NEWBIE – a FNG” and people start introducing themselves and each other.

Newbies need to do whatever the bartender requests, like taking out the trash, and you are a newbie until 7 consecutive days pass, then they graduate to family. One irish man came in, after a month or so he says I don’t like FNG (f-ing new guy) – he said it’s THE F-ING NICE GUY – so that has now been the ongoing interpretation of FNG with us for years now. Hope the language has not offended you – we are careful about that also.

I am blessed to have some of the best bartenders in Austin that believe in me, Giddy Ups and the customers and music, and community. We are a team, without them, I could not do my job. They take pride in their job at this particular bar. Most of them know how long and hard I have worked to keep the doors open. They are all very strong willed people, which is important to me, and they protect and defend this bar and customers and frequent. They also will stand up to folks that are not having a good day – our third motto “I see you are not having a good time, I’ll see you the next time” – and if that does not work, – I have said “hey, there are at least 680 bars in Austin, and this one is not yours” That is a very rare occurrence, but has and does happen from time to time.

I back up my bartenders even if they are wrong – customers that get upset of course find me, and I just say hey, they are in charge, they are bartending and have the responsibility to protect them as a customer and protect the bar as an employee – even if the bartender may be wrong, which is very unlikely, I will deal with the bartender one on one and never undermine them in front of customers. 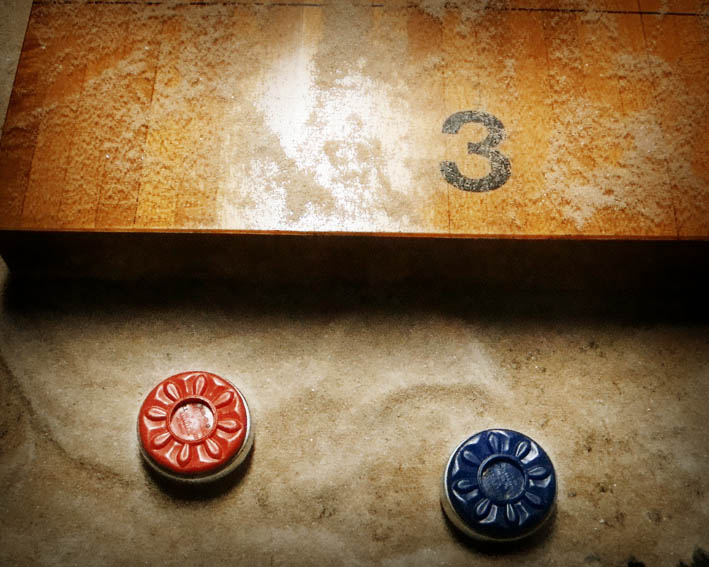 In 2007 I wanted to make this a music venue, did not know how to do this. A guy, that also came to my other bar, “The Fast Car Bar”, which was closed as Wal-Mart came to town, anyway this guy Don Sharp, would talk about how he booked bars downtown thru the 70’s & 80’s. Listened to him about a year, thought he was full of BS, but as time went on I thought ya know he may be able to teach me how to do this. I hired him, paid him $100 week to teach me what he knew and did to book music in Austin. That was in the beginning of Austin being “the Live Music Capital of the World”.

Well, he had me go thru the Austin Chronicle each week, circle bands that had their name listed often, and then told me to go see them. I did this for a month, going to clubs all hours of the nite, seeing these bands, asking them to book with me, etc, etc. It was a ton of work, and I still do this. I do not book a band unless I’ve seen them play live somewhere – I can see how they interact with the crowd, how loud they are etc – many different things go into booking an act at Giddy Ups.

Don cut me loose after a month, but still called me 2 or 3 times a week on my ass to make sure I was doing what I was supposed to do to make Giddy Ups a music venue – but I have one other little quirk about me – I wanted musicians to be comfortable here with each other, and support each other, and encourage each other in their sharing of their art.

So this is the music venue I have created and not many folks even know what it takes to create a music venue like in the” old days” – but I am old and I know this works for everyone, musicians, patrons, and I feel grateful and blessed to have so many great musicians grace our little stage. I will always be grateful to Don Sharp for teaching me even though he is an amazing salesman- however he did not sell me a bridge to nowhere on how to create a music venue and I am grateful.

And last but not least, I will always be grateful to A. Michael Uhlmann for doing the very 1st Music Showcase in 2008 – at that time we called it “South by So What” as we did not want to participate in the politics of charging money to see great music and where the money charged did not go to the musicians that made the event possible.

We do not participate in politics with musicians here. We love music and I appreciate all of the musicians that have helped over the years to make Giddy Ups proud to have “the biggest little stage in South Austin”.

15 years as owner of Giddy Ups, one of few honest honky-tonks in Austin, has given Nancy Morgan a valuable insight in and understanding of the culture we try so hard to pervade here at AOG. Not only is she a good hearted matriarch, music lover, talent scout, good company, good friend and respected host, she happens to have the gift of writing too. We are honored to have her contribute to our project.